The universe is an amazingly entity that scientists have studied for hundreds of years.  Much about our universe has been thoroughly explained but yet there is still so much more that has to be explained.  Stars are arguably the most researched objects in our entire Universe.  Since the dawn of time stars have been visible to the people on earth. Stars are so very interesting to people because they are extremely complex. From the beginning to the end of a stars life cycle there is so much to observe and so much to document.  Stars all begin life the same way but the end of the life cycle of a star is the interesting part. Depending on many different variables a star can end up as a white dwarf, neutron star, or a black hole.  The biggest deciding factor on how a star will end its life, according to many astronomers, is its mass. The Sun and any star with a mass that is around the same as our Sun’s mass will end its life as a white dwarf.  If a star after its final stages of life reaches a mass of over 1.4 solar masses it will become a neutron star. Black holes are produced at the end of a very massive star’s life cycle. 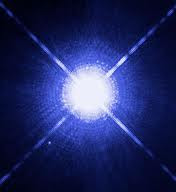 Above is just a general image of a white dwarf and below is a white dwarf in a binary system that is gaining mass (accretion) from a red giant. 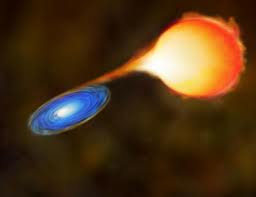 White dwarfs are the most common final stage in the life cycle of most stars in the universe.  There are many more stars in the universe with lower masses (similar to that of our sun’s) then there are massive stars so there are a lot more white dwarfs than neutron stars or black holes (3). A white dwarf is a very dense solar remnant that is supported by the balance between electron degeneracy pressure and the star’s gravitational self-attraction (3).  A white dwarf’s mass is about that of the sun’s mass but what makes them so interesting is that their size (diameter) is about that of the earth.
White dwarfs are a very interesting part of stellar evolution.  A white dwarf, when it is first produced, burns at the bottom left of the Hertzsprung-Russel diagram because of this astronomers know that white dwarfs are very hot but not very luminous when they are first produced. As white dwarfs age they begin to cool and if no other forces act on them they eventually become virtually non-existent and they produce no radiation.
White dwarfs are sometimes found in binary systems.  In a binary system two objects (in this case stars) are so close together that they gravitational interact with each other and the gravitational interactions cause the objects to rotate around a common center of mass.  When a white dwarf is found in a binary system typically the second star is a red giant. After sometime the red giant can begin to lose mass, when this occurs the white dwarf accretes matter from the red giant.  If the white dwarf gains enough mass to surpass the Chandrasekhar limit, which is 1.4 solar masses, the electron degeneracy pressure can no longer balance the star’s gravitational self-attraction (3). Thus resulting in a very bright type 1a Supernova (3). 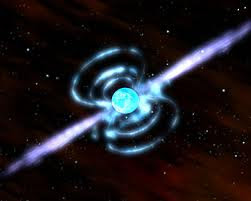 Above is a Neutron star, I pulses, that's why the image looks the way it does.

Neutron stars are remnants that form from stars that had initial masses of 4-8 solar masses. These stars go through supernova explosions near the end of there lives and they blow off matter and then form neutron stars of anywhere from 1.4 solar masses to 3.2 solar masses (1).  Neutron stars are supported by neutron degeneracy pressure.  Neutron stars rotate extremely fast when they are first formed, and they later slow down. They rotate fast initially because when the core of a massive star is compressed and it collapses into a neutron star its angular momentum is conserved and the size (diameter) of the star has been reduced to about the size of Ann Arbor. Astronomers have calculated neutron star periods of between 1.4 ms and 30 seconds.  Many astronomers refer to them as pulsars because when observed they appear to pulse because of their very fast periods. A neutron star’s gravitational field is so immense that the escape velocity is approximately 1/3 the speed of light or 10^5 km/s (5).
Neutron stars can also accrete matter from other objects in space. When neutron stars accrete matter they get smaller as the neutron degeneracy pressure grows more intense.  Neutron stars do have a similar limit to that of white dwarfs but when they reach their limit they behave quite differently (5).  When neutron stars gain matter and neutron degeneracy pressure is over thrown by gravity, a neutron star can form a black hole (5). 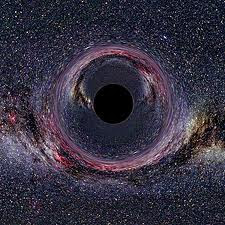 Theoretically this is what a black hole wold look like but of course we can't see a black hole but we can see how other objects are gravitationally effected by it.  Hints the above picture. 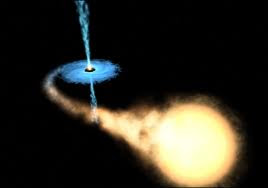 Above is a black hole that is gaining mass (accretion) from a star. (That black hole is a thief.....It's stealing all the stars mass...lol!)

Black holes are the least common final stage of stellar evolution and the most unexplained stage.  Black holes are a remnant of massive stars around 10-15 solar masses and are formed from the cores of the massive stars after a supernova.  The remnant of 3.2 solar masses or above is left over after the supernova (2). Both electron and neutron degeneracy pressure are not enough to balance the remnants gravity so it collapses.  This collapse produces such a sophisticated entity that not light can even escape it after the event horizon is passed.
Black holes, very massive ones, are found at the center of galaxies. The black hole at the center of the Milky Way is about 4.3 million solar masses. There are many black holes bigger than the one found at the center of the Milky Way and there are also smaller ones.  Black holes do not start of very massive (over 8 solar masses), they usually gain matter from objects failing onto them and or they merge with other black holes.  Stars can be tidally disrupted by super massive black holes (5).  When a star passes close enough to a black hole, the black hole can ‘steal’ mass from the star.  This is a very interesting phenomenon and many physicists and astronomers have researched it.
The universe is very big and it is comprised of many different objects.  Stars, planets, comets, asteroids, dust, and many other objects populate the universe.  Stars are the most researched part of the universe because there are billion and billions of stars.  Each star depending on its initial mass will either end up as a white dwarf, neutron star, or black hole.