On November 15, 2012 the University of Michigan welcomed Dennis Bodewits to speak on comets and asteroids.

Dennis Bodewits is an assistant research scientist in the Astronomy Department at the University of Maryland.  "His research emphasizes comets and asteroids, and he is a member of the EPOXI/Deep Impact and Stardust-Next science teams. His observational studies encompass X-ray, UV and visible regions, and makes use of mostly space-born telescopes, such as Swift, Chandra, and XMM-Newton".(http://www.astro.umd.edu/people/dennis.html)

In his speech Bodewits focused on the roles comets and asteroids played in the creation of water on Earth.  He had videos and many photos of artistic interpretations of water formation of Earth. Bodewits also gave detailed explanations of the compositions of asteroids and comets.

The Water of Earth. The Contribution of Asteroids, Comets, and Meteors

On November 8, 2012 the University of Michigan welcomed back a former graduate student Zhaohuan Zhu.

Zhaohuan Zhu was a graduate student at the University of Michigan some years ago. He now students at Princeton.

He went into great detail about how planets form. He talked about using radio velocities techniques (measuring the wobble of the planet) and imaging (viewing the planet head on).

Zhu also showed a very interesting video about the Almer telescope and its array formation. It is composed of many radio telescopes to give astronomers a deeper clearer view of the universe.With the Almer telescope astronomers will be able to view deeper into space as far back as many radio waves, and since they are in an array they are not limited by the viewing power of the telescope itself. They are all put together as one so essentially the viewing power is only limited by the amount of telescopes in the array.

Posted by Unknown at 6:12 PM No comments: The second direct method is infrared interferometry. Traditionally telescope's viewing power is limited by the diameter of the telescope's mirror or lens, but combining telescopes in an array can greatly boost a telescopes viewing power. Array telescope in space can then use infrared interferometry to detect exoplanets and their companion stars. This method is the newest method of detecting exoplanets but it seems to be the most promising because array telescopes could potentially easily detect exoplanets that take years to detect using other methods. 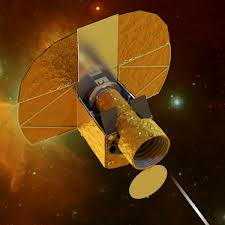 There are four indirect methods used to detect exoplanets.

The first method indirect is the radial velocity method. It is the most common method used to discover exoplanets. The reflex motion of a star due to the orbiting planet is measures as a change in a stars radial velocity. The radial reflex of the star is compared to the exoplanets orbit, using the measurements of Doppler shifts. These comparisons are used to calculate the mass of the exoplanet, its orbits shape, and its orbital distance. The exoplanets discovered using this method tend to be very low mass planets. 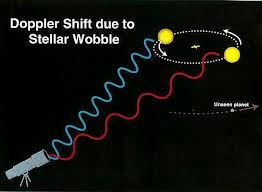 The second indirect method is the astrometry method. This method measures a star's position and how it changes over time so is mostly used to discover exoplanets that have very long periods.  After that you can use the acquired information to determine the actual mass of the exoplanet because you can determine the orbital plane of the exoplanet. The best place to use astrometry is in space but you can use this method from the surface of earth. The exoplanets discovered using this method tend to be very far from the solar system. 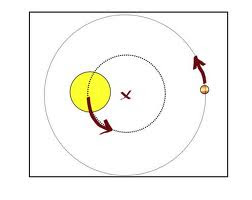 The third indirect method is the transit method. A transit is an event that occurs when a celestial object moves in-front of another celestial object. When the celestial body moves infront of the other larger celestial body it hides a small portion of it. Observers can see this occurrence at particular orbital points. This method reveals exoplanets when they transit their larger companion stars. Observers see a drop in the visual brightness of the companion star. The exoplanets orbit has to be perfectly aligned with the observers viewing point or the observer could easily miss the exoplanet. Also there is a very high amount of false exoplanet detections when using the transit method because dust, gas, and even planetary debris can easily cause a star to appear dimmer. 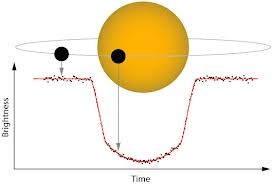 The fourth indirect method is gravitational lensing. Gravitational lensing occurs when the presence of matter effects the path of a light ray. The light ray, from the observers view can appear to be curved or highly unusual. The gravity field of a star can behave like a lens and it can magnify the light of a background star. The star, the background star, and the Earth all move relative to each other. If the lensing star has a companion exoplanet, then the exoplanet's gravitational field can be detected through its contribution to lensing effect. This effect only occurs when the stars are almost perfectly aligned. The lensing events are very short and they can never be repeated so it is very difficult to detect exoplanets using this method.

An exoplanet is a planet that is found outside of the solar system.  Exoplanets are also referred to as extrasolar planets.

Below is an example of an exoplanet orbiting in a binary star system: 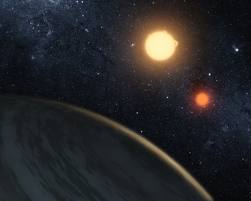 
Here is a picture of some of the discovered exoplanets compared to their companion stars: 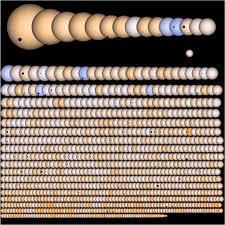